— Written By Bill Cline and last updated by Brandon Hopper

Dr. Allan Brown, a researcher with N.C. State’s Plants for Human Health Institute at the N.C. Research Campus, is leading a team that is sequencing the blueberry genome. The work is a major step toward understanding the genetic information of the blueberry, specifically which genes are responsible for making the health-protective natural components in the fruits. It is expected to yield new discoveries in both medical and agricultural research.

The blueberry genome project is the work of a multi-institution consortium of scientists, which expect to complete the sequence in Fall 2011. Brown, assistant professor and molecular geneticist, is also a faculty member of the N.C. State Department of Horticultural Science. In addition to Brown, collaborators at the N.C. Research Campus are bioinformatics experts Mark Burke with the David H. Murdock Research Institute (DHMRI); Dr. Cory Brouwer with the UNC Charlotte Bioinformatics Research Center; and Dr. Michael Wang, DHMRI Genomics Laboratory. 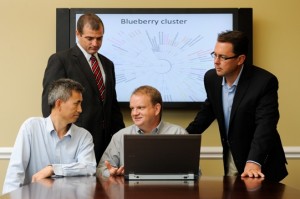 Other project contributors include Dr. Mark Borodovsky at Georgia Tech, Dr. Dorrie Main at Washington State University and Dr. Lisa (Jeannie) Rowland with the U.S. Department of Agriculture-Agricultural Research Service in Beltsville, Maryland. Borodovsky’s GeneMark software is being used to assist in the annotation, or interpretation, of the genome. Main is developing the genomic database for blueberry and other Vaccinium species (www.vaccinium.org). Rowland supplied the DNA used for the sequencing project and known markers on the current genetic linkage map.

A Glimpse at the Sequencing Process

Regardless of the object – a human or, in this case, a small fruit – sequencing a genome is complex work. It takes a team, cutting-edge technology and time. While genomes of a few other plant crops have been sequenced – grape, strawberry, apple and peach, for example – the tiny blueberry, Vaccinium corymbosum, is more challenging to sequence than many other fruits and vegetables due to the complexity of its chromosome makeup.

The scientists turned to technology – an amazing suite of scientific equipment at the N.C. Research Campus – to help decode some 500 million base pairs identified by the letters A, T, C and G. Those base pairs make up more than 25,000 genes in the blueberry, a plant with only 12 chromosomes (compared to humans, who have 46 chromosomes). Millions of letters make up the DNA-based code for blueberries. Sequencing decodes the blueberry’s DNA to reveal information that can accelerate research and lead to scientific breakthroughs. 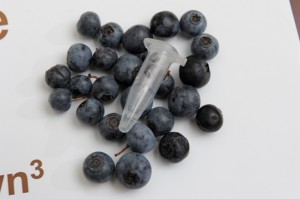 A plant’s DNA, or genetic code, contains important clues that have the potential to help solve health problems, such as preventing or curing disease. But it takes a plant sleuth to search out these clues. Dr. Brown is the “Sherlock Holmes” of the blueberry genome project. While the focus of the research is sequencing the genome, he simultaneously is interpreting the functionality of specific genes. He is comparing parts of the blueberry sequence to sequences of DNA in other plants where the gene functionality has already been identified.

The sequencing of the blueberry, a member of the Ericaceae family and a distant relative of tea, will provide beneficial information for other members of its botanical family, including cranberries. Each additional plant genome that is sequenced contributes to the repository of genetic information publicly available. Access to this information allows plant geneticists and breeders to identify similarities that provide greater knowledge, from how plants respond to the environment to the health-protective qualities they confer to humans.

Scientists with N.C. State and other universities at the N.C. Research Campus are cultivating the next generation of scientists by involving them in research opportunities. Students with nearby Davidson College, in Davidson, N.C., studied the blueberry genome as part of a biology course. They had a unique opportunity to work with the unpublished data and present their findings to the lead researchers. Students from UNC Charlotte are learning about the project in classes and through their work in the bioinformatics lab where the research is being conducted.

The Importance of N.C. Blueberries to the Economy

North Carolina ranks sixth in the nation in blueberry production, with an annual value of $58.2 million. 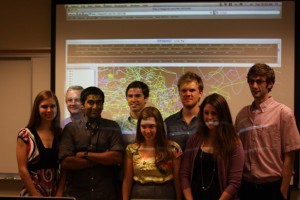 When the blueberry sequence is completed, it has the potential to result in improved blueberry varieties and a boost in yield and revenue for North Carolina farmers. Nationally the crop is valued at $501 million. In addition to the economic value, it’s the berry’s value to health that has scientists at the N.C. Research Campus excited about publishing the first blueberry genome sequence.

According to Dr. Mary Ann Lila, director of the Plants for Human Health Institute, the sequencing of the blueberry has the potential to enhance other blueberry research at the campus and around the world. More details on the project will be released in Fall 2011.