Find this article at:
go.ncsu.edu/readext?604469
— Written By Bill Cline

Exobasidium leaf and fruit spot has been reported from numerous locations in NC this year. The disease, caused by the fungus Exobasidium maculosum, is visible now on leaves, but will also infect berries, causing green spots on ripe fruit 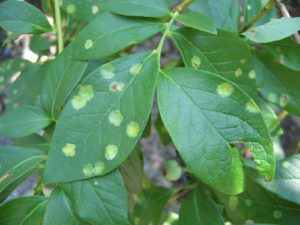 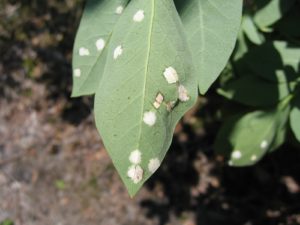 On berries, infection produces a green spot that fails to ripen normally. Affected berries do not leak or decay, but the green spot on an otherwise uniformly ripe berry is an unsightly defect that could lead buyers to reject the fruit. 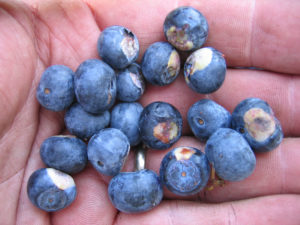 It is too late to prevent this disease in 2019. Treatment consists of spraying the bushes in late winter (February) with a lime-sulfur solution to kill the fungus where it overwinters on the surface of the stems. It is also possible to control this disease using a protectant fungicide like Captan sprayed repeatedly from budbreak through green fruit stage (February to April),

Most commercial growers treat routinely for this disease in fields where Exobasidium is known to occur. In the home garden it may make more sense to take a “wait and see” approach next year, since the disease is sporadic and may not recur. Like other Exobasidium diseases (such as azalea leaf gall and camellia leaf gall) this disease can be severe in one year, and nearly absent the next.